Have you ever received mail for someone you don't know?

We are making a short film inspired by the wrong mail.

Eduardo Munez tells the story of a man on the edge.... And a LOT of letters!

The original lndiegogo Crowdfunding Campaign for Eduardo Munez was 104% funded on December the 6th 2015 and the film is now in pre-production. You can watch our campaign video above! If you haven't already, you can still contribute towards the cost of the film as we are now an InDemand project on Indiegogo. All additional funds raised will be spent on making our film the very best it can be - particularly on production design which is really important to this very visual film. We are planning to shoot in early June.

Along with the funds needed to make the film we are also collecting lots of amazing letters from around the world for use in the film as props - what we don't want is for all the mail in our film to be boring junk mail! We are looking for mail artists and snail mail lovers to get involved in our project by sending us letters which we can feature in our film! We need a LOT of them!

We are looking for letters, particularly drawn envelopes, mail art and plain envelopes - not postcards. Most importantly the letters must be addressed to Mr Eduardo Munez.
We will have to change the production office address on the front of all the letters to the fictional address of the character in the film so please leave the address section fairly clear of decoration. Some of our Mail Artists have written the address in pencil - this is really easy for us to rub out and put in the fictional address so if it doesn't interfere with the design of your envelope too much, we'd recommend this as the best option.

In our film the letters to Mr Eduardo Munez do not get opened - so inside you can write whatever you like! You can use your imagination - who do you think Eduardo Munez is? What kind of mail would he receive?!

Once shooting on the film is completed we will video the team opening all the letters we have received and having a look at their mysterious contents...! We'll provide everyone who contributes with a password protected video link to watch them all being opened! All letter writers will also receive a special thanks in the credits too...

With each letter writer's permission - we will also publish them here and on our film Facebook Page.

WE NOW HAVE ENOUGH MAIL - A BIG THANK YOU TO EVERYONE WHO TOOK PART!

If you'd like to ask any questions about the project please email: ruthtapp@hotmail.co.uk 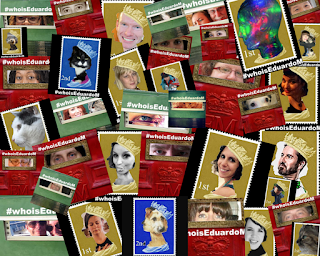 A collage of  #whoisEduardoM Facebook Badges made for our Indiegogo contributors in December 2015.

Sort by Mail Artist or Country of Origin.